Back to the London sketchbook. All trips to London start with a tea from Gourmet on Platform1, Stoke Station.  Here are a few sketches which I made around the Hornsey Road which runs parallel to Holloway Road, drawn over several visits.

On some of these trips, I enjoy making tiny thumbnail sketches in less than two minutes, then adding a bit of colour at home.

It’s surprising what you can catch when you know you only have seconds when the bus stops.

On my way to the Hornsey Road, I walked past Royal Northern Gardens, a park created in 2002 on Manor Gardens. The Royal Northern Hospital opened in 1888 and once stood on this site.  A new Casualty Department was opened in 1923 following WW1 as a memorial to the people of Islington and these rainwater hopper heads caught my eye, having been salvaged from the subsequent demolitions in the mid 1990s. They are now part of the memorial wall and used as planters.

Heading down Bavaria Road, I stopped to draw the ghost sign from the former Alexander Coffee Tavern. it turns out that this was once home of The Blenheim Arms, 395 Hornsey Road. Following closure this became a temperance pub called The Alexandra Coffee Tavern.

Another old sign caught my attention – ‘Plough Stables’. I was joined while I sketched by Martin and his dog Barney and I discovered it too was once a pub, a favourite of Martin’s dad.

Then sketching this ornate entrance to the Mosque, it too was once a pub – I smiled when I learned it was called the Hanley Arms.

I usually have to go inside to warm up at some point and since a kind person brought me out a green tea from the Rusty Bike Cafe, I went in for a bite to eat.

I will sign off with this sketch of an old red phone box, not so many around these days.

This week, Stoke Urban Sketchers celebrated international recognition as they were granted the status of ‘Regional Chapter’ within the global community of Urban Sketchers.

The group met up for a sketch this Saturday in the New Vic and the group founders, Laura Green and Rhomany Klair Scattergood were interviewed by the Sentinel for a feature as part of the Stoke bid for City of Culture 2021. There’s a taster video of the sketching session here filmed by Rhomany.

Instead of sharing my recent sketches, I thought I would rewind a bit to where I began  keeping a sketch book. A few years ago, it was a wish of mine to become a member of the Urban Sketching community. I loved the confidence and simplicity of sketches from life and how people would share their sketches from all over the world. The range of skill is quite dramatic – from hurried sketches to accomplished works of art.

Even with my background in architecture, I still found it quite daunting to sketch out on the street, but that was only until I came across the work of Danny Gregory and his genius idea of Sketch Book Skool.

I think I was the eighteenth person to enlist on ‘Beginning‘, that first round of Sketch Book Skool lessons, which was such a brilliant experience. There must be thousands enlisted now.  Danny and his co-teachers taught us all to just go for it – to sketch our days and in so doing we sketch our lives.

For these sketches, I was following a lesson given by Prashant Miranda, recording a day from start to end, my early dip into sketching from life, which is all urban sketching is about.

If you are thinking of joining a local group of Urban Sketchers – it is really informal and you’ll be made very welcome!

Fenton is one of the six towns of the Potteries, Stoke-on Trent. It’s the one that wasn’t included in the writing by Arnold Bennett. Many of you will know that Stoke is currently in the run up towards the bid for the City of Culture 2021 so I thought I could play a small part and share some of the architecture of the Sixth Town that may fall under the radar.

Driving along Victoria Road, Fenton last year, a row of dark red brick houses caught my eye and I pulled over to take a better look. It turns out that there’s quite a surprising tale of connections for me behind the history of these buildings but more on that next time.

So, fresh from the drawing board, some work in progress pictures of Victoria Road in the Hitchman Street Conservation area, Fenton. 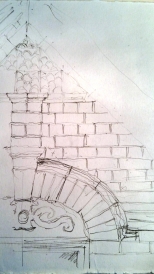 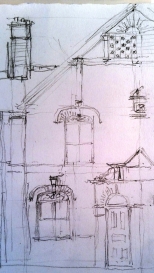 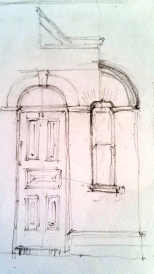 This is a row of terraced houses built on a philanthropic model for pottery workers towards the end of the 19th century. There is a comprehensive write up about the history of the conservation area here.

Look closely at the gables and there are some wonderful terracotta tile patterns. 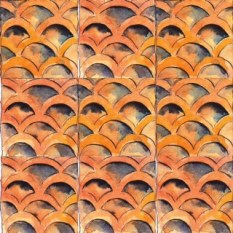 The thought that has gone into the design of the fronts is consistent, balanced and although intricate, it all adds up to a really attractive terrace.

Back to the drawing now and more about this next time.

Plans for January to be a time of taking stock of where I’m going and all that have gone out the window! Instead I’m treating it as a time to recharge the batteries.

We went for a great leg stretch up on the Long Mynd a week into the New Year which helped me recover form some cold bug (too long spent sketching in the cold in Hanley!) when I did the above sketch in Church Stretton whilst Iain went and had a look in a bike shop.

Christmas was fab but we had to say cheerio to our much loved old girl Nina shortly after. She almost made it to 14 years.

It’s a quiet house without a dog  (first time in 18 years) – although noticeably cleaner!

Then last Saturday afternoon it was really lovely to meet up with some sketching enthusiasts in Middleport Potteries, as I joined the Stoke branch of Urban Sketchers sketching in and around the buildings. 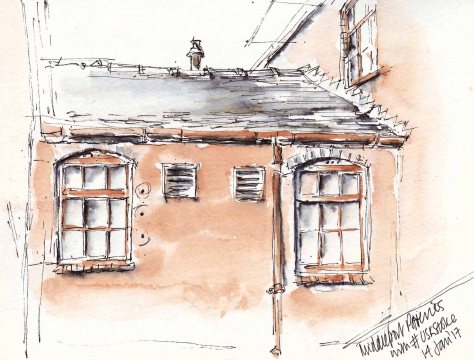 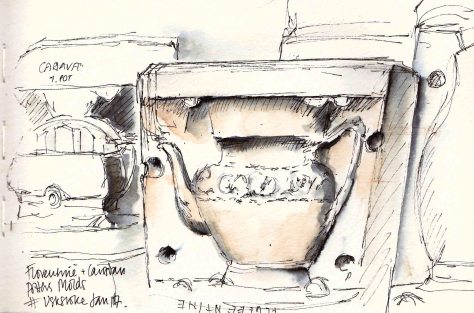 Middleport is famous for its Burleighware, those rich deep blue and white pots – we have a jug at home which my sister bought for me – like this one: 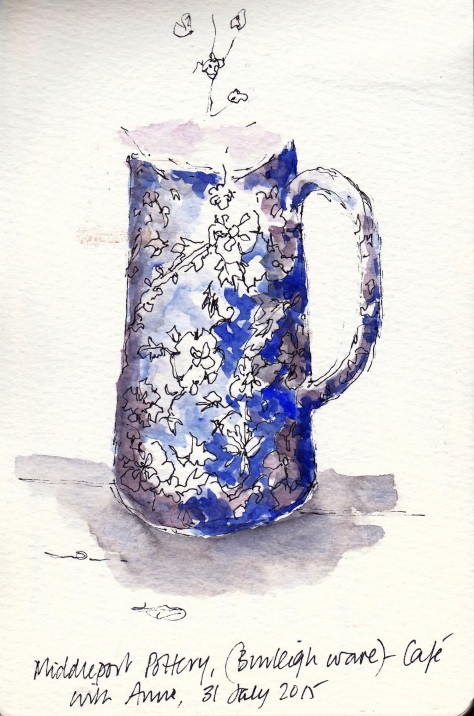 Thanks for reading and wishing you all a very happy and healthy 2017.