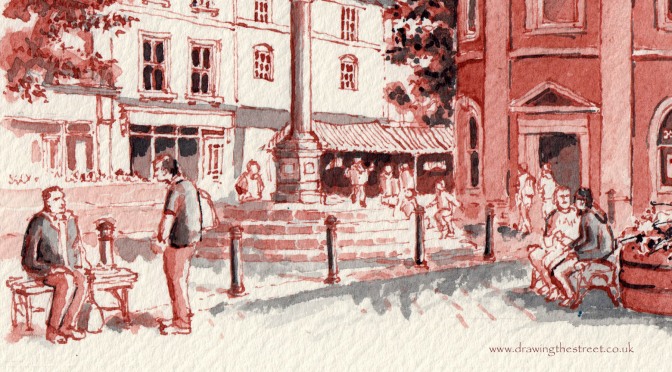 Newcastle town centre is alive with markets! Back in the 13th century, there was only the one market day but now markets are held 6 days a week with an additional one held monthly on a Sunday.

This is the second of six new red ochre sketches of Newcastle-under-Lyme town centre – the full set can be seen on my website Drawing the Street.

The history of the markets is ancient. There’s an in-depth write up on the town’s history on the British History website: there is evidence that a market was held in Newcastle-under-Lyme as far back as 1203 when the market day was changed from Sunday to Saturday, for which the burgesses had to pay a fine to the king. I bet the good folk of ‘Castle didn’t go much on that.

It’s possible that the market day remained unchanged until 1590 when under Elizabeth I’s charter, market day was declared to be Monday and it remained so until the beginning of the 19th century when an additional Saturday was added to meet a larger population.

Here’s the drawing in full.

Let’s take a few steps to the left and look at the market cross from a different angle. The market cross was located further up the street in medieval times, opposite the Ironmarket.

It required some restoration work in the mid-1500s when it’s thought that the five steps were built. Later, in the early 1800s it was moved to the present location when the lamps were added.

The finished original drawings are set in standard 10 x 12 inch mounts ready to frame and now listed with full description in my Etsy shop.

If you’re looking for a print instead – please get in touch.