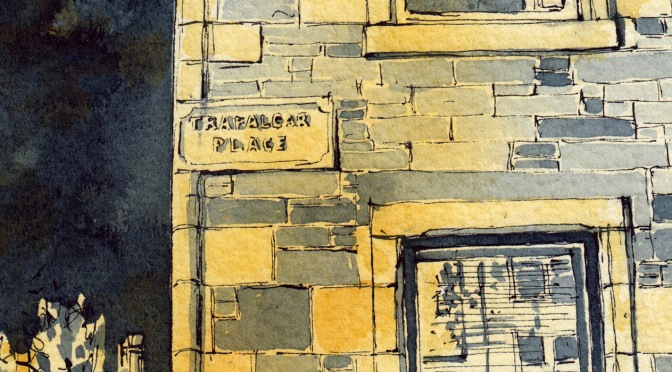 It’s easy to miss but if you look up at the front of the building where Bernard’s Wynd meets South Vennel, you’ll see a carved stone stating ‘Trafalgar Place’.

I only spotted this when I recently began a series of small sketches of Lanark to mark the month long Instagram drawing festival that is #inktober.

I hadn’t twigged that there were official prompts for the Inktober drawing themes! I simply began my own theme of drawing the views of Lanark that had caught my imagination – there are so many details that I want to pause a moment over by making a sketch.

Back to the name ‘Trafalgar Place’ on this street sign. The name doesn’t show up on the National Library of Scotland map of Lanark 1847-95 South Vennel. The photo below is a screenshot from the maps.nls.uk website, link above.

I did a search for ‘Trafalgar Place Lanark’ and came up with the ancestry website which records ‘Thomas Marshall Braidwood, born Trafalgar Place, Lanark, 1883-01-06, died 1967’. Braidwood is just up the road from us so a local Lanark connection. Thomas’s parents were Adam Braidwood (born in Douglas 1855) and his mother was Jane Marshall.

I find it interesting to look into the meaning of the names too so I looked up:

‘TRAFALGAR‘ this word is derived from ‘Cape in southwestern Spain, from Arabic taraf-al-garb “end of the west,” or taraf-agarr “end of the column” (in reference to the pillars of Hercules). The British naval victory over the French there was fought Oct. 21, 1805; hence London’s Trafalgar Square, named in commemoration of it.‘

Perhaps there are Braidwood families that can research further into the history of this building but that is as far as I got…days are short and I want to catch a daily sketch.

I will sign off with another view from South Vennel – here we see the rooftops of the old Lanark Grammar School on Wellgatehead.

If you would like to see my drawings unfold each day this month, I am posting them on Instagram @drawingthestreet. I will post a few of them as I go along over here too.