Hello! A warm welcome and thank you to recently subscribed drawing enthusiasts.

I’ve been working on this drawing in my local class taught by David Brammeld. It was only when I began this drawing that I discovered that one of my classmates was a regular Maxims  disco diva at this legendary night spot! It used to be known as the ‘Place Mate’ when it was owned by the same proprietors as ‘The Place‘ in nearby Hanley where disco was born and David Bowie and Led Zeppelin once played as pop youngsters.

However, when the dual carriageway was constructed around Newcastle-under-Lyme, Maxims was severed from the life blood of the town centre and now all that is left are these empty shells.

I wouldn’t have given these buildings much thought if it hadn’t been for the comments given by Moya when I displayed some of my drawings in Newcastle Library a few years ago:

‘Stand with your back to St Giles. Look across the dual carriageway to what used to be Maxim’s Night Club. This used to be the old Catholic Club and overspill rooms for St Marys School.  Also, it was the Old Pomona pub. When they took Evans sweet factory down behind it, they discovered that there was a courtyard and it had been a coaching Inn….Sammy Bell’s pottery was excavated in the car park/ courtyard area. The base of the Kiln is in the grounds of Newcastle Museum...’

The gloomy front masks a surprising gable window behind with a mosaic of pottery fragments. 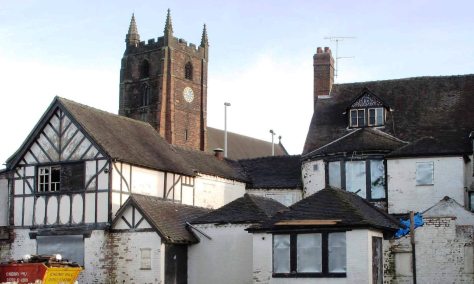 Not knowing these buildings, I walked around the back and peered through the hoardings which now surround the site. I was so surprised by what I saw that I thought they were definitely worth recording as part of my street records. However, a flat elevation wasn’t going to give any idea of the complexity of the roofs and layout so I opted for a sketch perspective instead.

I used Dr Martin’s Payne’s Grey ink on a sheet of  Khadi cotton rag paper, a heavy, textured and grainy paper – lovely to draw on.

There are plans underway for a new use for these buildings but it’s unlikely that they will remain in this organic sprawl for much longer. I would be interested to hear of any other insights into the history of these buildings.

Thanks for the comments Moya and thank you for reading.

There’s something great going on this weekend for anyone living in and around the Potteries.  Some of you may not know that Drawing the Street began in David Brammeld‘s drawing class not far from my home here in Newcastle-under-Lyme. Dave’s passion for drawing and painting the older parts of the Potteries has been a terrific example for me.

Dave’s work has gone from strength to strength and his work has been exhibited widely including the Mall Galleries and Royal Society of British Artists to name a few. This weekend however, he is giving a painting demonstration in the Potteries Museum to mark the grand finale of the Lowry and Berry exhibition  when entrance to see the the exhibition will be free.

‘This special exhibition features works by distinguished artist L.S Lowry and his local counterpart Arthur Berry together for the first time. It reflects their passion for urban life and highlights their individual styles.  These two working class artists who portrayed the world around them were unpretentious and their work showed the beauty and humour in the everyday.’ 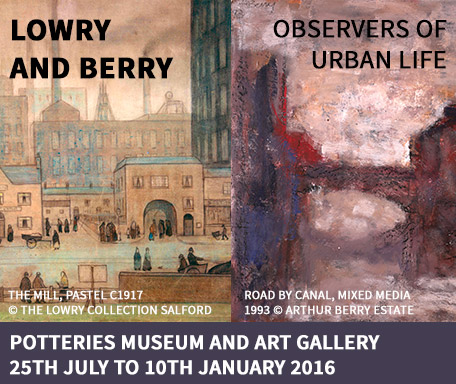 When I first joined the class, Dave encouraged me to dig into the character of the area that I was drawing, and told me about the book ‘ The Vanished Landscape‘ by Paul Johnson who wrote about growing up in the Potteries during the thirties. Johnson  recalls Lowry visiting his father, the head of the Burslem School of Art, during his childhood – the book’s a great insight into the life and character of the Potteries and the people.

I feel very lucky to attend Dave’s drawing class. He’s a dedicated teacher, patient with his students and there’s a great atmosphere as you can see here as we spring a surprise toast to one of David’s big art moments. I’ll be going to the exhibition and demo on Sunday. Hope some of you can make it too!

Thanks for reading –
Ronnie.