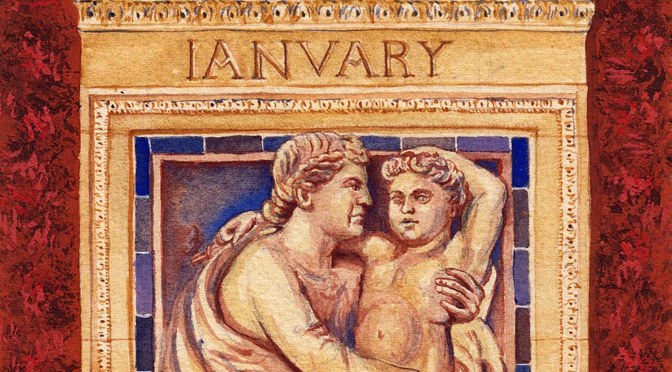 Sometimes titles for blog posts just pop into my head. This was one of them. It was something that Dad would say – that things ‘ticked by’.

Here we are in a new year, and already into the last week of January 2021. Looking at these terracotta panels created back around 1865 – the months and the years have indeed ticked by.

Having taken so long to bring this body of work to completion, it does make me think about how each moment that passes is never repeated quite the same. Something in context has always changed.

Here the woman is holding the infant New Year in her arms as he learns to stand on his own feet, ready to run headlong into the year. It’s a fleeting moment especially when you see how he fast he grows into February later in this post.

Looking at these images on top of the Wedgwood Institute, the months and the zodiac signs are neatly paired up in alcoves. Back when I was planning my work out, I gave some thought to drawing each alcove in turn, but decided the repetition was too much for me!

Then I thought I could draw a single alcove template and scan the months and zodiac signs on to the template. However, that involved a lot of learning on Photoshop and at that point I glazed over and decided against the idea!

The other thing that I couldn’t resolve was that the start of the months and zodiacs overlapped and that if I drew them together, there would always be someone looking at them saying I’m born in February but I’m not a Pisces!

It was a useful process though as it helped me decide to draw them all individually and here we are on with February.

When I signed them, I thought I had finished… so I put them away for what turned out to be a year. However, when I next saw them I immediately wanted to add more depth by setting them in a frame of rich red earth colours to hold them in place.

So January ticks by into February, the young year is now out there hard at work tilling the earth. Here’s a look ahead into March where he is planting the ground.

All the original paintings are available to buy from Barewall Gallery in Burslem and there are several full sets of signed cards available in my Etsy shop.

You can also see the full set of artwork on my website. If you see anything that is not yet for sale online – please drop me a line ronniecruwys@drawingthestreet.co.uk Things are selling a bit faster than I anticipated! 🙂

Here are the rest of the months – when they were all lined up ready for mounting and sending off to Barewall Gallery in Burslem.

This has been a fab project – so pleased to have brought it to completion and returned it back home to Burslem before being shipped far and wide.

Thanks for reading and happy Burns Night!